May and June 2018
Medieval events in Barnet
In May medieval re-enactors visited Barnet High Street. A few days later heraldic banners (created by Battle of Barnet Project volunteers at Barnet Museum) were put up in The Spires and High Street. This was all buliding up to Barnet Medieval Festival on 9 and 10 June. 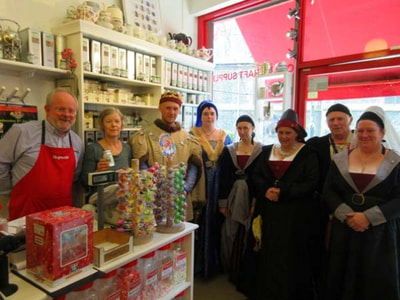 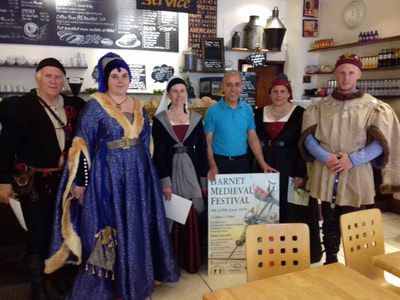 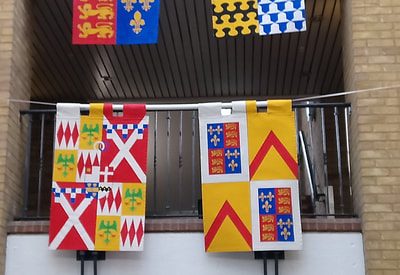 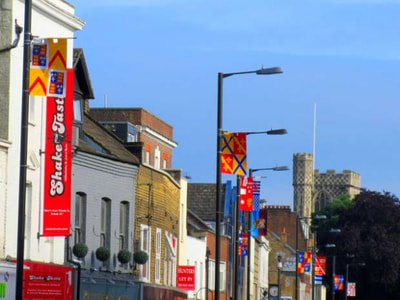 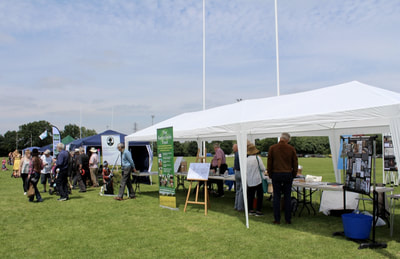 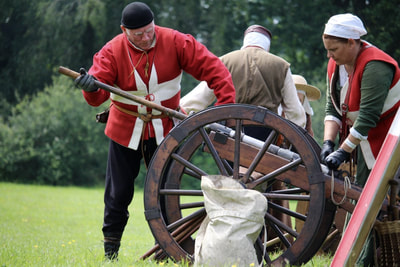 Jan-Mar 2018
Battle of Barnet school loan box piloted by local primary schools
So far very positive response from teachers and pupils. The box is filled with medieval replicas, maps, pictures and a teachers’ pack, with background information and activity suggestions. It will add to Barnet Museum’s current schools’ programme, which includes visits to the Museum, and Museum volunteers giving talks in schools. 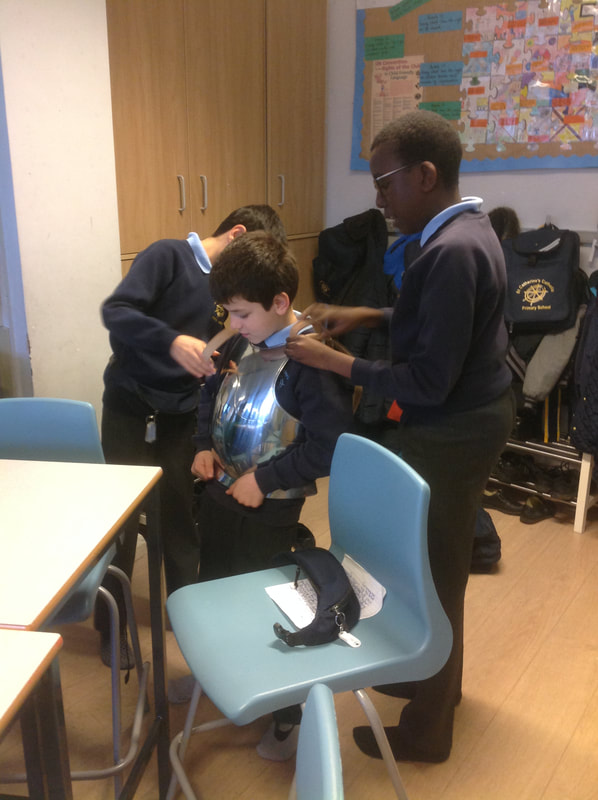 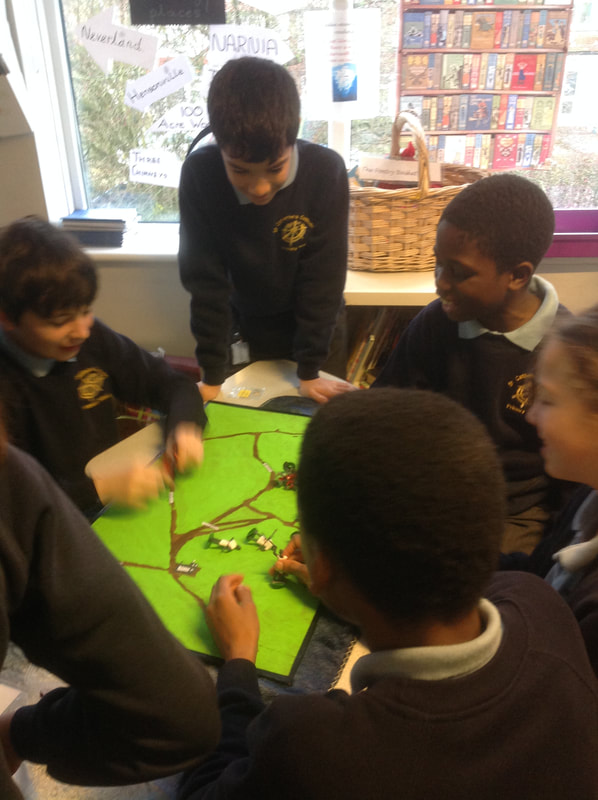 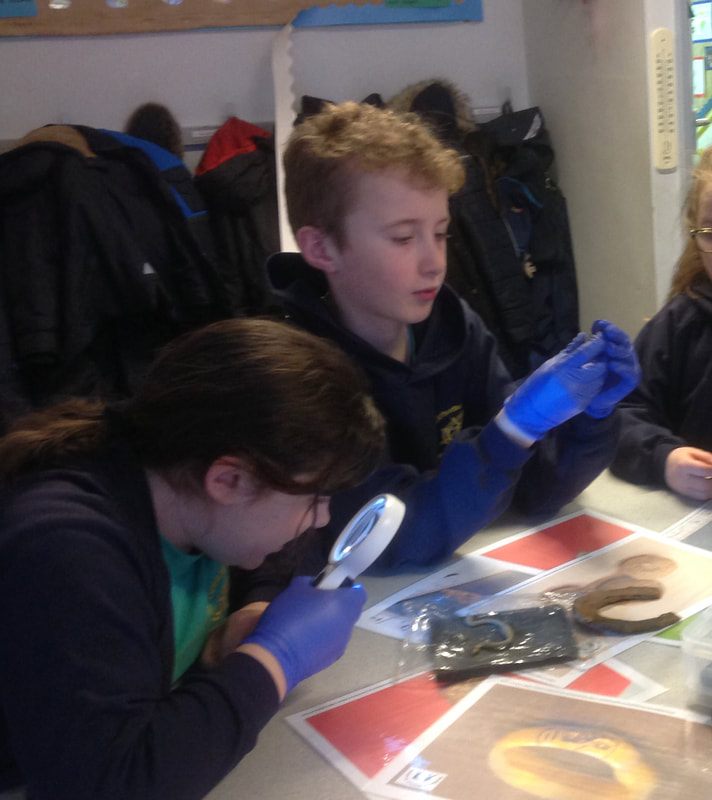 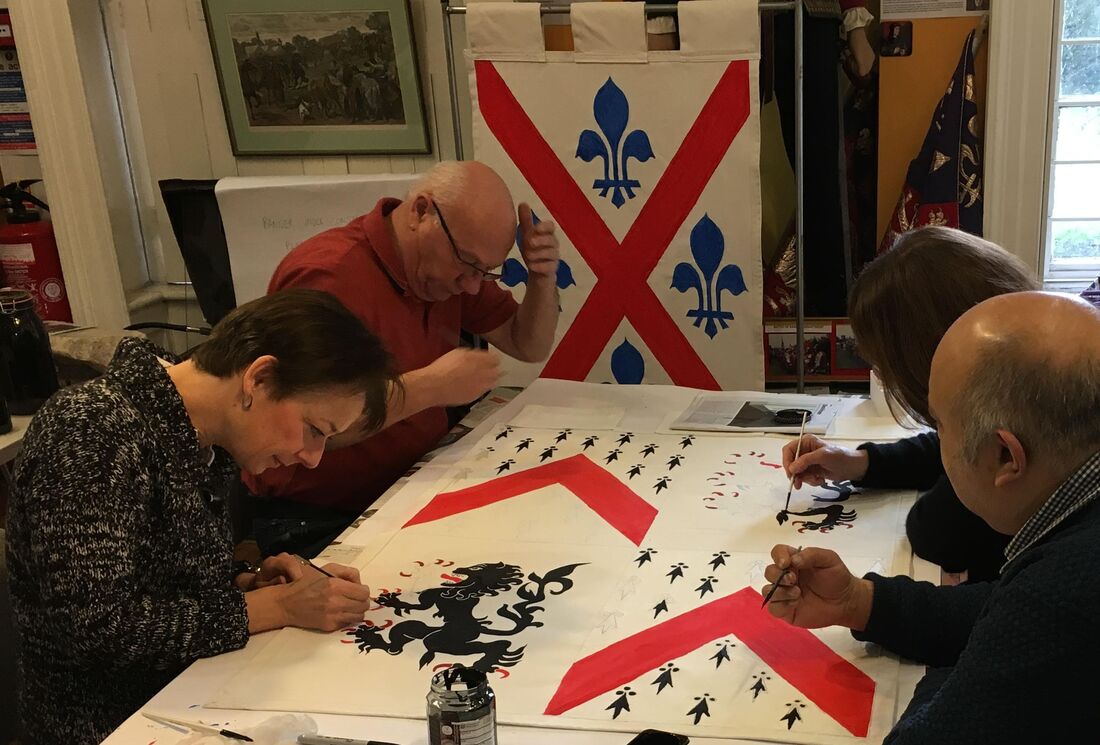 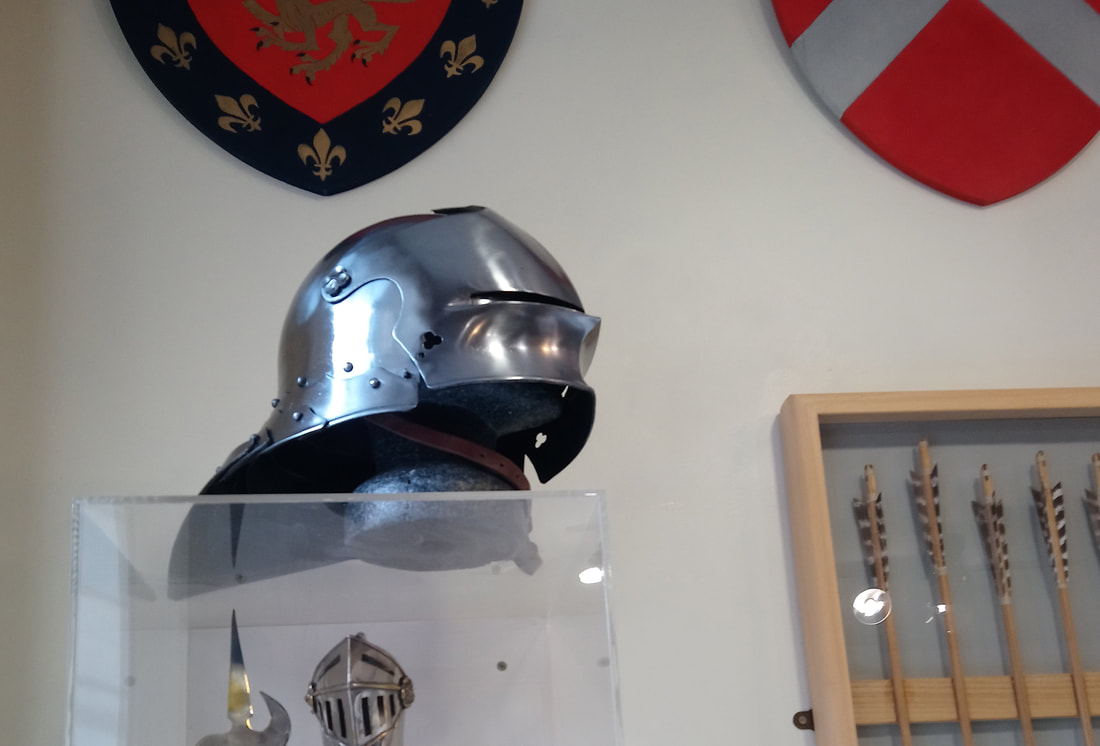 Jan 2018
Replica of medieval helmet
A replica of a sallet (medieval helmet) is acquired for the exhibition. The original is in the German Historical Museum in Berlin. “A helmet like this would have been worn at the Battle of Barnet by a wealthy knight or man-at-arms. It was made in Germany, at Nuremberg or Augsburg, which were two centres for the manufacture of medieval armour” said Howard Simmons, the Battlefields Trust representative on the Project.
Jan 2018
Countdown to Barnet Medieval Festival begins
Preparations begin for the 2018 Barnet Medieval Festival. Artist Graham Turner will do artwork for the poster.

Jan 2018
Audio recordings
Volunteer actors record audio extracts from Battle of Barnet sources, including letters and chronicles, for the loan box and exhibition.

Nov 2017
Battle of Barnet Leaflet
A new leaflet has been produced by the Battle of Barnet Project which highlights locations around Barnet which relate to the battle – this is available free from Barnet Museum.

Oct 2017:
Test-pitting
Archaeologist Sam Wilson, along with volunteers from Hendon & District Archaeological Society (HADAS) and the Battle of Barnet Project spent a week digging test-pits (small trenches) to search for a chapel built by Edward IV after the Battle of Barnet. This chapel would have been built near to the site of the battle. Finds were cleaned by more volunteers at Barnet Museum. 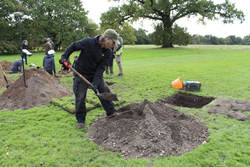 Sept 2017:
Loan box to help school children re-discover the Battle of Barnet
Reaching out to local schools to explain and promote Barnet’s role in the Wars of the Roses is one of the key objectives of the lottery-funded Battle of Barnet project. Primary and secondary school children will soon get the chance to touch and feel the types of artefacts that were in use in 1471 when the Yorkist and Lancastrian armies clashed in the fields north of Hadley Green. A loans box filled with medieval replicas, and hopefully also some original items, will be available for teachers to help them engage and enthuse their pupils.
Hannah Brownlow, newly-appointed Heritage Learning Consultant, will work with volunteers from Barnet Museum to develop the loan box for schools in the Barnet area. “The Battle of Barnet was a decisive engagement in the Wars of the Roses and is really relevant to the history curriculum,” said Ms Brownlow. “Barnet is the only registered battlefield in London, and local schools have already expressed great interest in working with the project. So, this is a real opportunity to do something creative in telling the story, and especially episodes such as the life of the young King Richard III. As well as history, we want to encourage schools to develop their ideas, perhaps in drama, art and ICT.”
As well as the artefacts, Ms Brownlow will also develop a teachers’ pack, with background information for teachers, activity suggestions, maps and pictures.
The loan box will add to Barnet Museum’s current schools’ programme, which includes school groups visiting the Museum, and Museum volunteers giving assemblies in schools. 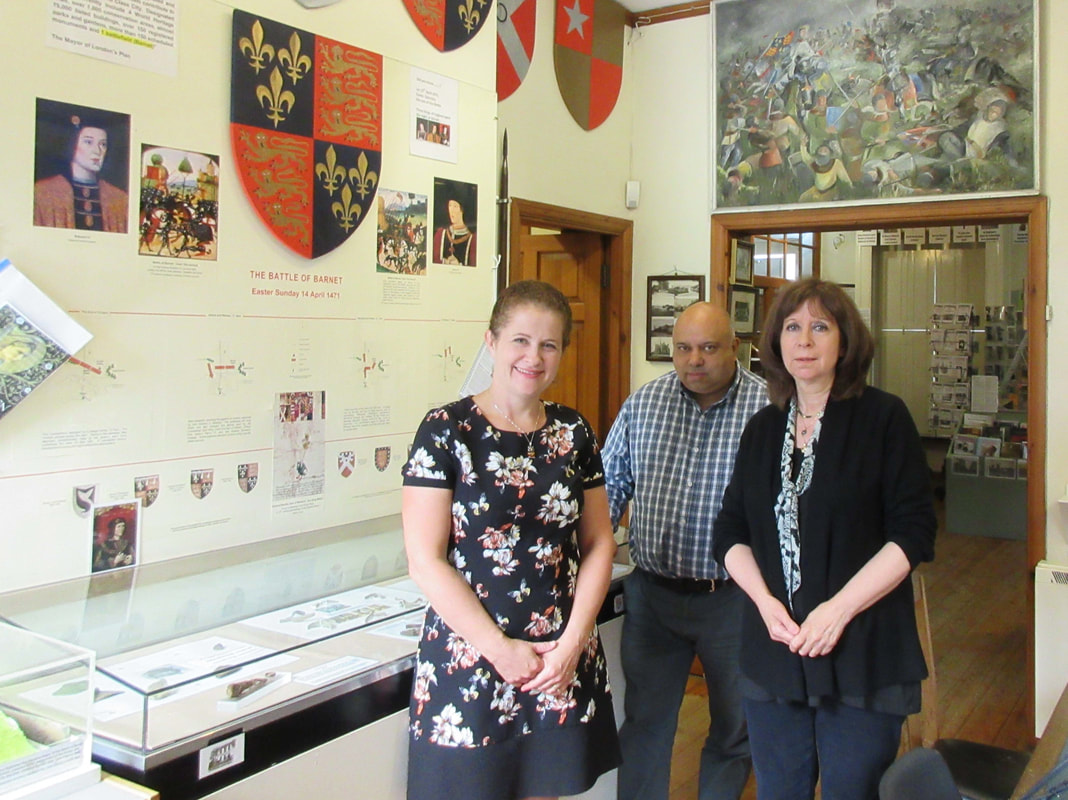 Hannah Brownlow (left), newly-appointed Heritage Learning Consultant for the Battle of Barnet Project, with Barnet Museum education volunteers Mike Noronha and Hilary Harrison
June 2017:
Our first Barnet Medieval Festival took place on Sunday 11 June. In sunny weather, around 1000 people came to this free event, with re-enactors from the Medieval Siege Society, medieval food tasting, a children's craft activity, music, stalls and refreshments from Old Courthouse Cafe. Among those enjoying the day were our local MP, Theresa Villiers, the Deputy Lieutenant of Barnet Martin Russell, the Mayor and Mayoress of Barnet and Councillor David Longstaff. Thanks to everyone who came and to everyone helped and provided resources for the day. Another Barnet Medieval Festival is planned for next year!
May 2017:
HRH The Duke of Gloucester visits Barnet Museum
We welcomed HRH The Duke of Gloucester to Barnet Museum on a sunny morning in May. After looking round the Museum, the Duke visited Barnet Physic Well and then the probable site of the Battle of Barnet. 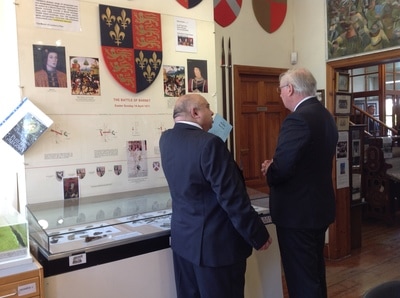 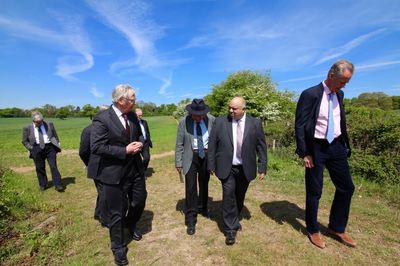 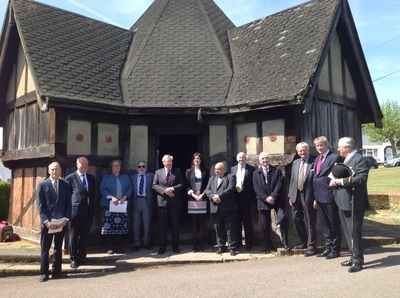 April 2017:
Battle of Barnet Project Co-ordinator appointed
Helen Giles, who has wide experience as a museum curator and consultant for numerous heritage projects, has been appointed project co-ordinator for the Battle of Barnet Project – to promote and explain the Battle of Barnet of 1471.
Her appointment is one of the many elements of the Battle of Barnet Project that has been made possible by a grant of £98,600 from the Heritage Lottery Fund (HLF).
HLF funding will enable the project team, co-ordinated by Ms Giles, to develop activities and resources to inspire the local community to find out more about the Battle and its role in the history of Barnet and in the Wars of the Roses.
Collaborating with history projects in local schools, opening a new gallery at Barnet Museum devoted to the Battle of Barnet, and the promotion of an annual Medieval Festival, are among the Project’s aims.
Ms Giles has over 17 years’ experience in the museum and heritage sector, and has worked extensively with volunteers in ensuring that heritage projects are delivered in accordance with HLF requirements.
Her latest assignments include Project Manager for the restoration of Holkham Walled Garden at Wells-next-the-Sea, in Norfolk, and Project Curator for Wardown House Museum in Luton, two other projects that have been funded by the HLF.
A proportion of the Barnet HLF grant will fund Ms Giles two-year contract. She takes up her appointment with the Battle of Barnet Project in May.
Interest in the project to find out more about the Battle of Barnet – a programme backed by Barnet Museum, the Barnet Society and the Battlefields Trust – has increased considerably since the start of an archaeological survey in the autumn of 2015 in fields and land to the north of Barnet.
Ms Giles said she could not wait to start work discovering more about the location and importance of Barnet’s battlefield. “I am sure that for many people Barnet’s role in the Wars of the Roses, and its connection to Richard III, is an untold story. My aim will be to do all I can to help the dedicated team at Barnet Museum build on their local heritage. I hope my experience in delivering projects backed by the Heritage Lottery Fund will be of real value, especially in bringing the museum’s collections together, and in creating events to involve the local community and, also hopefully leave a lasting legacy.”
Mike Noronha, Barnet Museum trustee, congratulated Ms Giles on her appointment and welcomed her to the museum. “We are confident Helen’s experience will help take us to the next stage in developing and promoting interest in the Battle of Barnet. We are determined to make our contribution towards regenerating the town centre, and in putting Barnet on the map.”

December 2016:
Battle of Barnet Project gains Heritage Lottery Fund grant!
We are very pleased to announce that the Battle of Barnet Project has been awarded a grant of £98,600 from the Heritage Lottery Fund (HLF). Led by volunteers from Barnet Museum, Barnet Society and the Battlefields Trust, the Project will develop activities to help the community to discover more about, and commemorate, this significant local battle.
Thank you to everyone who has helped as we have developed the Project. We have been really encouraged by the support we have received from the local community and are excited by the potential for bringing people together and for regenerating our local area.
The Lottery funding will allow us to develop resources for local schools, a Medieval Festival, community archaeology, a heritage trail, a new Battle of Barnet exhibition at Barnet Museum and much more. There will be lots of opportunities to get involved (there is a link to a ‘can you help’ form further down this page).
The Battle of Barnet was one of the most important battles in the fifteenth century Wars of the Roses, a thirty-year series of conflicts over who was the rightful monarch. Three kings of England were in Barnet that day! (Edward IV and Henry VI – who had both been crowned king during the Wars of the Roses – and the future Richard III.) Also at the battle was the prominent nobleman, the Earl of Warwick – known through history as ‘the Kingmaker’. An archaeological investigation was launched in autumn 2015 to help us discover more about this ‘Battle of Three Kings’. Further archaeology is planned for next summer.
Commenting on the grant award Mike Noronha, a member of the Project team and a Trustee of Barnet Museum, said: “We are delighted that the Heritage Lottery Fund is supporting the town of Barnet as we set out to commemorate and celebrate this important part of our history”.