Welcome to our shop. ​

Our Museum shop sells a range of books and booklets on local history, as well as historic maps, posters, CDs, cards, postcards and gifts, many of which are only available from Barnet Museum.

To make a purchase, send your address details and a cheque made out to Barnet Museum to:
Barnet Museum, 31 Wood Street, Barnet, EN5 4BE.
OR send your address details to:
shop@barnetmuseum.co.uk
and make a payment using the following bank details:
Bank: CAF Bank:  A/c name: BARNET MUSEUM: A/c number: 00021085: Sort code: 40-52-40
​
​If you are buying several items please contact shop@barnetmuseum.co.uk to get a revised and possibly discounted P&P
​

​This book has been created in recognition of the Queen’s 70 years of service.  It also covers royal connections with Barnet from earliest times.  The Queen’s Silver, Golden and Diamond Jubilees as well as royal visits made to Barnet are all included.  The book is lavishly illustrated and is a delight to the eye as well as containing much interesting information.
£10 + £3 p&p

The Battle of Barnet in Fact and Fiction (Published 2021)

This very recent publication, in full colour, marks not only the 550th anniversary of the battle , but it also examines the role of the key players in the battle together with depictions and interpretations of their personalities, roles and motivations from a wide variety of historical and literary sources. This book will be much appreciated by adults and children alike.

78 pages in A4 format.  £10 + £3 p&p = £13 total
The Chipping Barnet War Memorial: The Men on the Memorial
This book covers the Barnet men who died in the first world war and whose names are on the memorial. It researches their lives, who they were, when and where they fell.  It also gives their regiments.  Photographs and illustrations abound.

86 pages A4 format   £10 + £3 p&p  = £13 total
​The Chipping Barnet War Memorial World War Two
This book describes the men and women on the memorial who fell in the second world war, who they were, when and where they fell – This is set in a timeline of world, national and local world war 2 events, such as the V2 that fell on Carlton Road, Barnet in 1945.
​
162 pages A4 format   £15 + £3 p&p  = £18 total
A Hundred Years of the Chipping Barnet War Memorial 1921-2021
Barnet Museum has recently published a book to mark the 100th anniversary which records the full history of the memorial. It charts it time from initial conception in 1919 through to construction, its relocation in 1938-39 into the new Garden of Remembrance, and details how the memorial has formed a focus for the town’s Armistice and Remembrance Day since the unveiling on 3rd April 1921 across the years right up to the present day.

80 pages A4 format   £10 + £3 p&p  = £13 total
Chipping Barnet's Military History
This covers the period 1850 to the present day, reviewing the forces of the Militia based for 50 years at Barnet Barracks, the Rifle Volunteers and the Territorial Forces. The timeline details events from 1661 to 2019.  There are maps, photographs and biographies of notable characters.
​
76 pages A4 format   £10 + £3 p&p  = £13 total
​The Second Boer War
This book records information about the service and family histories of several men of Chipping Barnet who served in the Second Boer war 1899-1902. The book explains the background to the conflict and charts the course of the war. It includes a timeline which explores some key events of the British Empire from 1600-to-date.

96 pages A4 format.  Cost £10 + £3 p&p  = £13 total
The Friern Hospital Story: The history of a Victorian Lunatic Asylum
This is the story of Colney Hatch asylum, one of many ‘large, purpose-built lunatic asylums’ opened by local authorities in the early 1800s. The book includes interviews with staff, patients and local residents, as well as many photographs and illustrations.  Topics covered include Mental Illness and Poverty, treatment, Work and Therapy, Entertainment, Wartime, Care in the Community and many more.

180 pages   £14.99 + £3.50 p&p  = £18.49 total
The End of the line
The story of the railway service to the Great Northern Cemetery. King's Cross station was linked to the Great Northern Cemetery by a special train service which took funeral parties from central London to the outskirts where burial space was more readily available. This was a short lived service unlike that in south London. Many of London's institutions made use of the service and records of burials are available from the New Southgate Cemetery.

£1.50 + £2 p&p  = £3.50 total
A School of our own: Queen Elizabeth's School Barnet
A history of Queen Elizabeth’s Girls’ School in Chipping Barnet, written to celebrate the school's 125th anniversary.

£10 + £3 p&p  = £13 total
​All over by Christmas
This book tells the story of life on the Home front during the Great War – civilians coping with everything from sugar rationing to Zeppelin raids.  The changes of mood from optimism to war weariness are also recorded.  It covers the areas of Barnet, Friern Barnet, New Southgate and Whetstone.

278 pages  £10 + £3 p&p  = £13 total
Finchley Sketchbook
There are 60 pages of very attractive paintings of well-known and lesser-known buildings and places by Mari I’Anson.

£15 + £3 p&p  = £18 total
Finchley Remembered
This Finchley Society publication covers many aspects of  Finchley life in the 20th century, such as childhood, school days, celebrations, shops , entertainments and famous personalities.  There are maps and drawings beautifully illustrating the articles.

This is a much bigger collection of articles than usual - a reflection of the behind-the-scenes work in the museum that has carried on during covid-19.  Articles are about one of America's founding fathers passing through Barnet, life in some local streets as recorded in the 1911 census, Basque children brought to Arkley during the Spanish Civil War, old postcards of Barnet, the arrival of arrowheads and the seal of Warwick (dating from the Battle of Barnet and found in Barnet in the 19th century) on loan from the British Museum no less. And other articles too 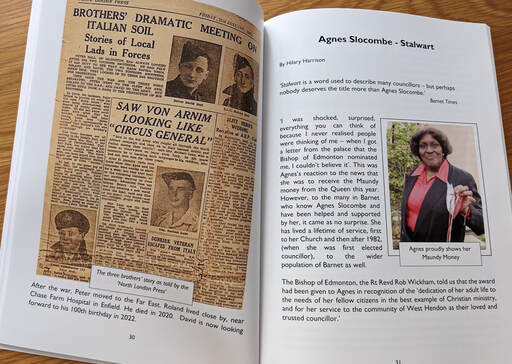 ​This book, first printed in 2012, had sold out so, due to popular demand, the decision was taken to update the walks and reprint.  Areas covered in the walks include Arkley, Mill Hill, Totteridge, South Mimms, North Mimms, Little Heath, Ridge, and Bentley Heath.
£4 + £2 p&p Total = £6

Barnet Market received its Royal Charter in 1199. In this book Jennie Lee Cobban and Doreen Willcocks explore 800 years of the Market's colourful history.​

This book covers the trail from Barnet,, via Palmers Green and Edmonton to finish at Tottenham Hale.  It describes the history of places passed as well as giving a step-by-step guide to the route itself.
£8.99 + £2 p&p  = £10.99 total

A series of articles about Georgian houses in Monken Hadley, a quiet area just to the north of Chipping Barnet, that still retains some of these houses today....
£3.50 + £2 p&p  = £5.50 total

The story of Barnet Physic Well, ‘the tourist attraction that never quite made it’. 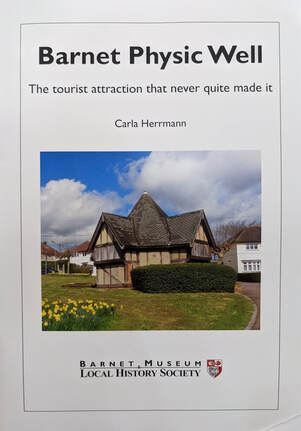 The booklet describes the royal associations with Barnet (focussing on Chipping Barnet, East Barnet, New Barnet, Hadley and surrounding areas). It has been produced to mark the visit by HRH The Duke of Gloucester to Barnet Museum in May 2017.
£2.50 + £1.20 p&p  = £3.70 total

Wars of the Roses

This is a colourful well-illustrated book with a guide to the beginnings, the battles and  the main figures.  It includes a royal family tree of the houses of Lancaster and York.  It will appeal to adults and children alike
30 pages  £6 + £1.50 p&p  = £7.50 total

The Battle of Barnet (reprinted in 2019 with some new images)

This earlier booklet about the Battle of Barnet, includes the background to the battle, the battle itself , weapons and armour , and contemporary sources relating to the battle. The booklet includes photographs, maps and diagrams.
14 pages   A4 format
​£3 + £1.20 p&p  = £4.20 total

A history of Monken Hadley, including the church (and its beacon which was lit to warn on the coming Spanish Armada), sport, Hadley Brewing, Hadley windmill, shop, schools and famous residents, such as David Livingstone....
£5 + £2 p&p = £7 total

18 page A4 booklet of photographs showing the changes that have taken place in Barnet High
Street from the late Victorian era. Designed to be particularly useful for children, it is of interest
to all ages.
£2 + £1.50 p&p  = £3.50 total

A Thousand years of Barnet Boundaries

Memories of growing up in East Barnet between 1923 and 1926. 'It shows a colourful, lost world full of action, pathos and humour.' 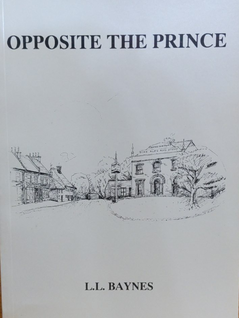 This 18 page booklet dedicated to all the men, women and children who lost their lives in the 3 World Wars sold in aid of Help for Heroes. 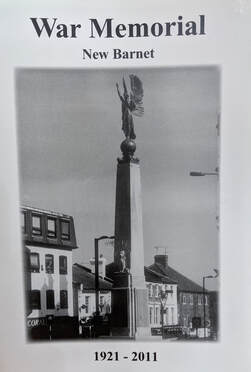 A series of short articles on the history of Chipping Barnet and the surrounding area. Includes the Battle of Barnet, Barnet Physic Well, Barnet Workhouse, the coming of the railways to Barnet, Barnet Fair and much more... 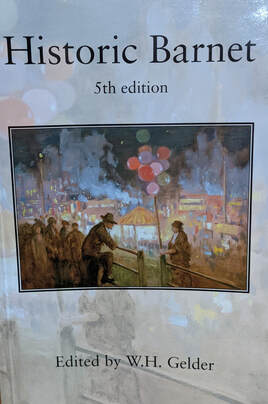 The Barnet Museum and Local History Society has searched its archives to provide a record of how the society and the Museum have developed since its foundation. Extracts of past lectures, details of events and memories of volunteers are included in its pages. Together they reflect the story of the town of Chipping Barnet and the area around it. 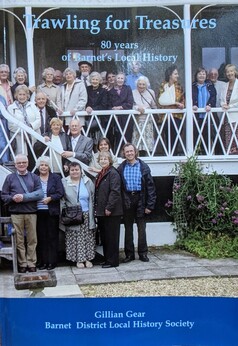 The Gentleman’s Magazine 1731 -1800
This volume contains all Hertfordshire material of substance published in the Gentleman’s Magazine between 1731 and 1800.  There are lists of births, marriages, bankruptcies and deaths.  It is also a rich resource for research in many different areas of interest: history, robberies, court hearings, executions, fires and obituaries.  There is an extensive index so information is easily accessible.
£10 + £3.50 p&p = £13.50 total

The Diary of Benjamin Woodcock, Master of the Barnet Union Workhouse, 1836-1838
This fascinating book of Woodcock’s diary entries describes his daily routine admitting and caring for the workhouse inmates, his handling of problems and how he copes with the demands of visitors interested in the newly conceived method of dealing with the poor.  It is a unique insight into the running of an early workhouse, the views and actions of the master, of the Guardians and the paupers.
£20 +p&p £4

A County of Small Towns
The development of Hertfordshire’s urban landscape to 1800 is shown.  This book brings together research into the origins, growth, and topography of towns in the county.
£16 + £3.50 p&p = £19.50 total

Geoffrey de Mandeville and London’s Camelot, ghosts, mysteries and the occult in Barnet
Historian and archaeologist Jennie Lee Cobban explores the occult mysteries of the Barnet area, delves into its hidden history and brings to life some of the bizarre characters who have lived in this most surprising of London suburbs....
£10 + £3.50 p&p  = £13.50 total

Rambles Round Barnet Vol 2
In 1947 the treasurer of the newly formed Barnet Society Mr E.H. Lucas was asked by the society to produce a report on the condition of local footpaths. This led to the publication of a booklet in 1948 called Rambles Round Barnet. As part of the 2012 Diamond Jubilee celebrations, some of the walks were revised and reprinted. This is the second volume of these walks.
£4 + £2 p&p = £6 total

A Slice of Life – Hadley Highstone in Victorian times
Topics include Houses and Cottages, Workers in Iron and Wood, Travellers and Public Houses.  It is well-illustrated and beautifully presented.
£10 + £3 p&p  = £13 total

The Steam Engine at Wrotham Park
A small beam engine of the Grasshopper type: this c.30 page A4 booklet 'summarises what is known about the engine, its history and operation.'
£2 + £2 p&p  = £4 total

The Story of St John the Baptist, Chipping Barnet
This well-illustrated book covers the history of the church from medieval times onwards, the benefactors, the choir , the bells. We also have Notes on the Memorials and other Inscriptions in the Church. This booklet also shows a church plan marking all their positions .
Book £2 + £2 p&p  = £4 total
HISTORIC ORDNANCE SURVEY MAPS:
​All maps cost £2.50  + £1 p&p  = £3.50 total
LOCAL HISTORY BULLETINS :
Short articles on local history, with photographs, produced by Barnet Museum (A5 pamphlets, 8-16 sides) priced £1.50 each + £1 p&p  = £2.50 total
Local self-guided history walks.
Each of these are £1.50 p&p £1.